The level of US debt, already elevated before COVID-19 hit, skyrocketed as Congress put into place much needed fiscal stimulus in response to the pandemic, and it may jump again as the Biden administration targets its stimulus goals. Markets have seemed unfazed by fiscal stimulus measures, and they’ll likely stay that way at least through 2021, but there will likely be economic consequences in the long term.

US Federal government debt is likely to pass 100% of gross domestic product (GDP) in 2021, a level only seen during the massive World War II war effort [Figure 1]. Markets have seemed largely unfazed by skyrocketing government debt levels. To the contrary, they have seemed to embrace the improved economic outlook that comes with stimulus. At the same time, concern over debt levels have become more widespread. 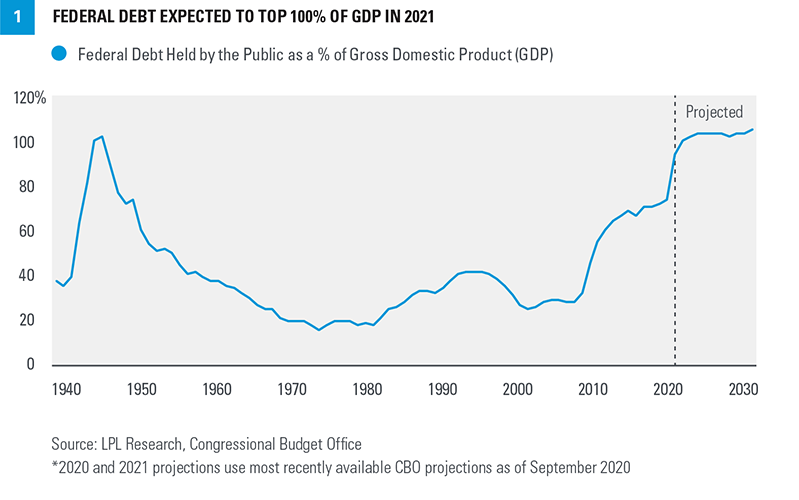 While some pundits have been dismissive of growing debt concerns, our team at InVestra believes that the reasons for increased scrutiny are clear and grounded in common sense. You don’t get something for nothing, so at some point rising debt levels will have consequences. There are also concerns about the moral hazard that can accompany unchecked spending. Although increasing debt levels may be justified, we should be wary enough about it to have a sense of a reasonable point for restraint. Finally, many view the debt not as the government’s but the people’s, and we naturally want our representatives to be careful with our dollars.

Why have markets seemed indifferent to the rising national debt and when, and how, will it end? The answer to the first question is that we’re still well positioned right now for additional spending to have a reasonably positive impact on the economy with fewer of the usual risks. As to when the market indifference will end, however, experts expect that it won’t be at least until later into 2021 or even 2022. Eventually debt will likely weigh on growth, whether through periods of relative austerity or from economic consequences, but the impact can be spread out over time, especially if the political will comes around quickly enough.

All Debt is Not Created Equal

Rising debt, whether through increased spending, reduced revenue (lower taxes), or both, isn’t always a bad thing. It’s at its worst when policymakers are reaping the political rewards of enabling people to spend more than they otherwise would at the cost of future spending. The impact is also worse proportionally worse to the higher the cost of borrowing, whether directly, through high interest rates, or indirectly, through indirect economic consequences. But government debt is not always bad; not all debt is created equal.

When can borrowing make sense? There are two main cases:

So far, most of the added fiscal stimulus during the COVID-19 pandemic has likely been less costly than doing nothing, and that will probably be true for at least some of any additional stimulus that might be passed, which is why markets so far appear to be responding positively to the prospect of additional government spending. We don’t have particular guidance on the right size for the next stimulus package(s), but up to some point it will be cheaper than doing nothing at all.

Now is A Good Time to Borrow

High national debt levels and heavy borrowing can impact the economy in a number of ways. Future interest payments are a drain on tax revenues and the government is competing with businesses for investment dollars, making it harder for them to have access to capital. Adding to demand when it’s not needed can increase inflation and excess stimulus can also weaken a currency. We are actually in an economic environment that, at least for now, mitigates these risks. It doesn’t mean that governments should borrow just because they can, but it does mean if they need to, it’s a good time to do it.

But it it Sustainable?

Near-term anticipated national debt levels are sustainable in that we don’t think that they’ll lead to a sudden financial crisis, but that doesn’t mean they come without consequences. They are already leaning to an inclination toward some austerity, for instance, because high debt levels come with uncertain risk. Ultimately, this may make it harder to provide stimulus when we need it in the future, and debt levels likely have contributed to lower productivity gains as less efficient government spending becomes a larger facet of the economy.

The biggest challenge, though, is that the continued growth of entitlement programs due to demographic pressures will increase the debt slowly over time and will have to be addressed eventually. Unfortunately, attempting to lower the yearly deficit, never mind the accumulated national debt, is a losing political battle and there is little will to do it. Since 1965, the US government has run a surplus in only five fiscal years: 1969 and 1998–2001. Extended delays will make this issue harder to tackle once policymakers have little alternative, but even then the solutions will be incremental. Any solution will have to work on different levels: entitlement reform (for example, raising the age at which people can take social security or adding means testing), higher taxes in some form, and lower spending. Even then, though, the most important takeaway is that the debt will eventually need to be addressed and while it will likely weigh on growth, it’s unlikely to create a crisis. We can look at Japan for perspective, whose debt-to-GDP ratio is twice that of the United States, and while they don’t have as robust an economy as the US, neither is it in crisis.

The market response to fiscal stimulus so far (and to the prospect of still more) has been to price in better economic growth. Those expectations have played a role in pushing up bond yields as well, although they remain extremely low. Stocks also responded positively to the stimulus measures of Presidents Reagan, G.W. Bush, Obama, and Trump even prior to the pandemic. The US is fortunate right now as a borrower, as it has a good environment in which to borrow and has the opportunity to use borrowed funds productively. Surely enough though, there will come a time to show restraint again and get deficits back under control. The effect of a high debt level will be certainly measurable and probably long-lasting, but not plainly obvious in our day-to-day lives and may have a negative (but manageable) impact on markets too. Entitlement reforms will add to the pressure, but again can be gradual. For now the main focus for markets will be on effectively reopening the economy.

This material is for general information only and is not intended to provide specific advice or recommendations for any individual. There is no assurance that the views or strategies discussed are suitable for all investors or will yield positive outcomes. Investing involves risks including possible loss of principal. Any economic forecasts set forth may not develop as predicted and are subject to change.

References to markets, asset classes, and sectors are generally regarding the corresponding market index. Indexes are unmanaged statistical composites and cannot be invested into directly. Index performance is not indicative of the performance of any investment and do not reflect fees, expenses, or sales charges. All performance referenced is historical and is no guarantee of future results.

Any company names noted herein are for educational purposes only and not an indication of trading intent or a solicitation of their products or services. LPL Financial doesn’t provide research on individual equities.

All information is believed to be from reliable sources; however, LPL Financial makes no representation as to its completeness or accuracy.

The Standard & Poor’s 500 Index (S&P500) is a capitalization-weighted index of 500 stocks designed to measure performance of the broad domestic economy through changes in the aggregate market value of 500 stocks representing all major industries.

The PE ratio (price-to-earnings ratio) is a measure of the price paid for a share relative to the annual net income or profit earned by the firm per share. It is a financial ratio used for valuation: a higher PE ratio means that investors are paying more for each unit of net income, so the stock is more expensive compared to one with lower PE ratio.

Earnings per share (EPS) is the portion of a company’s profit allocated to each outstanding share of common stock. EPS serves as an indicator of a company’s profitability. Earnings per share is generally considered to be the single most important variable in determining a share’s price. It is also a major component used to calculate the price-to-earnings valuation ratio.

All index data from FactSet.

This research material has been prepared for InVestra Financial Services.